1.2.1 All team captains must be in the BeNeDota Discord. (https://discord.gg/MnBrSQb)
1.2.2 Communication between captains can be done through the designated channel in the Discord, where it will be visible for tournament administrators as well. If a reschedule is made through another communications platform, it is required to show proof of the communication between the captains.
1.2.3 Communication with the Administrator / League Moderator goes via the team captain and should be in Dutch or English. In case of an emergency, other team members can contact the organization.

2.1.1 The structure of the tournament is split over 2 stages. The first is a swiss-format-like group stage with 6 teams, followed by a double elimination bracket playoff.
2.1.2 The top 4 in the group stage will place in the upper bracket of the playoffs.
2.1.3 The bottom 2 in the group stage will place in the lower bracket of the playoffs.
2.1.4 The teams are split into separate divisions. The divisions are seeded on MMR and, if possible, results from previous seasons.
2.1.5 Each team will play 1 game each week, unless special circumstances can cause the need for two teams in the division to play an extra game in that week.
2.1.6 In case of a tied position that has influence on the prize money of either team, a tie breaker needs to be played to decide the position of each team.
2.1.6.1 If the tied position has no influence on the prize money, the result of the played game between the tied teams will decide the final position.

2.2.1 By default, all games are scheduled on Sunday evening at 20:00 CEST.
2.2.2 If either team cannot play on Sunday, the team captain must initiate the rescheduling. The game must be played the week before the Sunday.
2.2.3 Games can be rescheduled if both teams can come to an agreement. For continuity in the tournament, the game must be played in the same week.
2.2.4 All communication about rescheduling must go through the discord channel #league_reschedule.
2.2.5 If the game cannot be rescheduled, the team present on Sunday will receive the win.
2.2.6 The reschedule request must be sent out at latest twenty-four hours before the start time of the match.
2.2.7 When both parties agree on a reschedule request, the Administrator / League Moderator must be notified.

3.1.1 The team roster can have max. 8 players
3.1.2 The team roster can contain up to 2 players that are not from the BeNe region (Belgium and the Netherlands).
3.1.3 In case of emergency, an extra stand-in (outside of the registered team roster) can be requested, but this must be approved by the opposing team and communicated to a tournament administrator.
3.1.3.1 Stand-ins (outside of the registered team roster) cannot be part of the roster of any other team in the tournament.
3.1.4 For teams to be eligible to participate in division 2 (and lower), the highest MMR player must have an MMR lower than 4500.
3.1.4.1 In case of doubt, a screen sharing your stats window of your main account with a tournament administrator will be used to confirm registered MMR.

3.2.1 Team, Player and Sponsor name cannot include any offensive language.
3.2.2 The players must play on their main accounts.
3.2.3 The name used in a match must be the same as the one used while signing up.

4.1.1 If a match series consists of more than one game, then all games will be played the same day with a break between the matches of no more than 15 minutes. If the games take too long to finish the team captains can contact an Administrator / League Moderator and discuss the possibility of playing the remaining games on a different date and time.

4.3.1 Both teams are expected to show good sportsmanship.
4.3.2 Pausing is allowed for a maximum of 10 minutes (cumulative). A longer pause is allowed if the opposing team agrees, or the Administrator/League Moderator makes an exception.
4.3.3 If a player disconnects, his team can pause immediately. The opponents are not allowed to unpause until this player is back or 10 minutes have passed.
4.3.4 Both teams must agree when unpausing.

4.4.1 The match result must be submitted as soon as possible after the match. This has to be done through participant reporting on Toornament.
4.4.2 Both teams must confirm the match result.
4.4.3 You should add a screenshot of the result of the match, so you can hand it over in case of discussion of the result and you can add it to the report in Toornament.

4.5.1 The matches can be streamed by a player. To prevent stream sniping, we suggest putting your stream delay to at least 5 minutes. Lower stream delay is allowed but at its own risk.
4.5.2 The matches can be cast by designated casters.
4.5.3 Casters must put their stream delay to at least 5 minutes if they stream from the lobby.
4.5.4 Unofficial casters in the lobby must be approved by both teams. (Unofficial means: not designated by BeNeDota)

4.6.1 The game mode is Captains Mode.
4.6.2 The team sides and picking order will be decided by a coin toss.
4.6.3 If more than 1 game needs to be played (BO2, Bo3, …), a reverse coinflip needs to be used after a “normal” coinflip game. (e.g. game 1 is a normal coinflip, game 2 reverses coinflip outcome and teams follow the order of selection)
4.6.4 Enable Cheats must be set to no.
4.6.5 Fill empty slots with bots must be set to no.
4.6.6 Spectators must be allowed.
4.6.7 The selected server should be Luxembourg.
4.6.7.1 An exception to this rule can be made if both teams agree on another server.
4.6.8 DotaTV delay must be set to 5 minutes.
4.6.9 The correct League Ticket and League Match must be selected inside the lobby.

5.1.1 Hacking during a match is not allowed and will be punished with a default loss and a ban from the league until the end of the season or permanently (depending on the severity of hacking).

5.2.1 Abusing known bugs is not allowed and will be punished with a default loss or a ban (for the rest of the season or permanent) depending on the severity of the abuse.
5.2.2 If during a match a bug is discovered the game must be paused. The bug must be reported to an Administrator / League Moderator and that person (together with the teams) takes a decision on how to continue.
5.2.3 Neither team can abuse that bug. 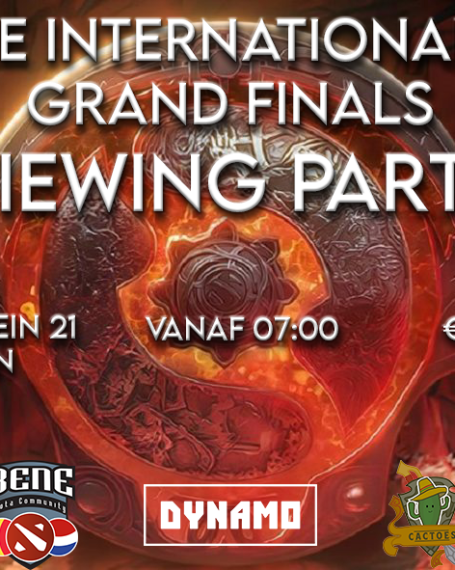